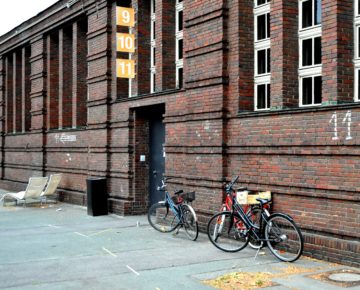 For Biennale participants and guests

As a result of the grave political and social upheavals of recent years in many parts of the world, the question of the relationship between art and politics is back in focus with renewed urgency. Engaged art and art activism have taken on central roles in the international art scene and are being presented and discussed in theatres and Biennials. But more influential than spectacular actions is the growing awareness for social responsibility among artists and artistic institutions.

The day long performative conference “Matters of Engagement” in the frame of the Dance Education Biennial 2018 takes less another look at specific political-artistic works, it rather focuses on what attitudes and actions are developed at the moment. How does the past continue to effect us if, for example, postcolonial criticism doesn’t stop at calling into question Western art, but also our everyday culture? How are social spheres of possible action currently being created with artistic strategies? And how can art as a as an experimental setup create links to the future? For this, three forms of action are considered: the repetition of actions (re-enacting), actions in the present (acting) and pre-emptive, anticipatory actions (pre-enacting).

“Matters of Engagement” sets the audience themselves into motion and doesn’t differentiate between theoretical and artistic, between verbal and physical discourses. In an opening lecture in form of a performance, the young theatre makers of HAUPTAKTION present ina re-enactment of European and African dances how choreography and everyday choreographies are colonially shaped and contaminated – and this acknowledgement opens a door to new things. After this the conference turns into an excursion: The visit of ten organisations, groups and spaces initiated by artists simultaneously serves as an incomplete mapping of social-artistic engagements and as possible stimulation for our own actions. The spectrum of sites visited ranges from “Neue Nachbarschaft Moabit” (initiated by Marina Naprushkina) and the *foundationClass of the Kunstakademie Weißensee on the art activists of Peng Collective and Zentrum für Politische Schönheit to discursive art spaces such as Savvy Contemporary or different groups fighting against gentrification around Kottbusser Tor. Finally, following a short collective action with the choreographer Dana Yahalomi/Public Movement, political scientist Oliver Marchart formulates his take on the concept of pre-enactments as the artistic anticipation of a political event, or even as an opportunity to actively develop everyday social utopias in dance and theatre. Plenty of material for dinner discussion  when the conference fades out in different constellations.

The biennial conference, “Matters of Engagement” is about the relationship between dance and politics and above all about the shifts in social and institutional frameworks. A conference is usually programmed as part of the Dance Education Biennial but the choice of theme and configuration is up to the host organisation. In the following interview, curator Florian Malzacher, Nik Haffner, artistic director of the HZT and artistic associate Britta Wirthmüller explain why and in which ways they have reconfigured the format for 2018.

For this biennial conference, yourselves and the participating students will examine the relationship between art and politics, dancers and society. What made you choose this topic?

Britta Wirthmüller (BW): We wanted to choose a topic that is relevant to the HZT and we are really engaged with. A topic we also  have questions about ourselves but which isn’t so specific that it only works for the HZT and one which could potentially occupy all students and teachers and towards which all educational institutions have a position. The starting point was what links the things we do in our institutions every day with what goes on in the world around us?

The conference is not structured as a series of talks but as an excursion with space for reflection. What was the reason for this unusual format?

Nik Haffner (NH): We found it more exciting to demonstrate possibilities for action and making suggestions rather than producing knowledge and hope that the students could take and use these as soon as they join companies after their studies or work as independent artists. A conference can all too easily become academic, eluding the interests and needs of most students. We did not want the conference to just be a prestige event for the HZT, for which we invited lots of external people. It is directed towards the group of students and teachers taking part in the educational biennial.

BW: The shared experience is important to us. This plays a big part in dance, whether in dance classes, rehearsals or workshops. At academic conferences there is a coming and going, the participants say to themselves ‘I’ll come back when the big names are speaking’. At “Matters of Engagement”, we’ll stay as a group from 11 in the morning till 9 at night.

Florian Malzacher (FM): In recent years, the view of political art has changed somewhat. It now plays a major role in biennials such as at Venice and the last documenta. On the other hand, a stronger resistance is forming that is asking whether or not this is art at all – as can also be seen in the discussions around documenta. At this conference however, we are more interested in which forms of artistic activity engage with real political events and above all, which concrete groups and initiatives have been established here in Berlin. And this raises the question of what can be negotiated in what way, what one is allowed to do artistically – for example in relation to politics of identity and postcolonial problems.

The opening talk of the conference is a performance. In “Situation with Doppengänger”, Oliver Zahn and Julian Warner deal with postcolonial appropriation in dance – which movement material can I use? Do I have a right as a white person or not? These questions occupy and also unsettle many artists at the moment – one is suddenly questioned in a certain way or even attacked for something one hadn’t thought of before.

When I show students older performances on video, I sometimes notice very clearly that our perceptions have changed. Some things (hopefully) wouldn’t be made in that way again and other things should simply not be done any more. Of course there is a fine line between this and self censorship. Questions such as these effect students very much at the moment – they should be more informed about them. On the other hand it is often the younger generation that knows about these issues already and it is the older ones who still need to be sensitised towards them.

How does the conference programme concretely reflect these changes?

FM: Very real initiatives form the focus of the conference. You could say that they are examples of best practice that will be questioned. In this way a whole spectrum of artistic/political practices will be outlined, from postcolonial studies to gentrification to migration to artistic activism. The idea is to use Berlin as the biennial’s location – and through ten excursions, to involve a range of speakers which wouldn’t be possible in a normal conference. It is a sort of curated walk through the city visiting different initiatives founded by or at least involving artists: the Neue Nachbarschaft Moabit (Moabit New Neighbourhood) initiated by Marina Naprushkina or the *foundationClass at the Weißensee Academy of Art Berlin established by Ulf Aminde, the artist activists of the Peng! Collective or the Zentrum für Politische Schönheit (Center for Political Beauty) as well as locations for artistic exchange such as Savvy Contemporary or groups in Kreuzberg who fight gentrification in and around Kottbusser Tor.

Using these examples as a starting point, we identify three types of action: the repeated action (Re-enacting), acting in the present (Acting) and anticipatory action (Pre-enacting). The political scientist Oliver Marchart who recently published a book about pre-enacting, addresses how art anticipates political gestures or events in his talk. One of his central examples is the work of the Israeli group Public Movement who will also take part in the conference.

It’s actually also about choreographic questions of course, such as the one posed by Judith Butler during her speech at Occupy Wall Street: What does it mean when living bodies come together? How does a movement form from a collective body? There are links between dance and politics of course but sometimes you do not even see what tools and what knowledge you might have, or you don’t know how to use it. As a snapshot of social relationships, the conference could perhaps address that.

Britta and Nik, what is the urgency of this approach for you?

BW: This certainly has an urgency in relation to dance and dance education for me. It was not that easy to find examples in dance that respond to real political situations. I find that symptomatic. In dance education as I see it and have experienced myself, there is still a very strong emphasis on the self – even if this has changed somewhat – and on your own body: How well do I conform to a certain standard? In technical training especially the idealised image of a dancer is still very strongly defined. The teachers’ assessments count a lot and I see that students are little motivated to ask themselves what sort of dancer they want to be. It would be important to always ask at such moments, when do I dare to disagree? When do I dare to ask, “OK, I could do that, but can you tell me why I should?” The structures are quite patronising. In this environment, at least as I see it, students shy away from questions of political consciousness and rather say, ‘politics doesn’t have anything to do with me’. In this way, from my perspective, every dance class actually raises fundamental political and social questions.

NH: Yes, the political has small beginnings: How do I participate in things as a student, how do I behave in everyday situations? At the biennial, for example, we offer a workshop in which a mentor is available but there is no ‘teacher’. We trust the students – they bring plenty with them to shape an exciting week. The dance training conference was immediately open to this idea too, there is a great willingness to try something new.

It sounds as if a paradigm shift is necessary in dance education – or perhaps it is already in progress?

NK: Yes, it’s already begun. In many training courses its almost unavoidable to focus very much and to sort of put on blinkers. But we have a duty as teachers, the students are usually very young and, in all sectors, international. Are we really able to say, in a political situation such as today’s, that we don’t have time to deal with such fundamental questions, because we’ve got to prepare for the next contest? The biennial offers an opportunity for us all to pause once more. Ideally, it will be an experience that moves something in the participants and that will come up again later and that they can use. That’s why we have purposely broadened our horizons. We haven’t just invited our partner universities with whom we already have affiliations through our exchange programme or whose training systems resemble ours, but we have also invited three guests from whom I hope we can learn a lot: Karima Mansour from the Cairo Contemporary Dance Center, Mohamad Abbasi from the Invisible Center of Contemporary Dance in Tehran and Alesandra Seutin from the École de Sables in Senegal. They all work under completely different conditions to us, not only financially but in terms of space – what does it mean in a country like Iran to dance at all?

BW: Ideally it will reflect how dance education has functioned for us for decades. For me it is also about sensitising the students to what could be ‘political’ for them. There should be certain things that are just not acceptable any more in training, which five or ten years ago were seen as totally matter of course. In my opinion, that is, or would be, an important challenge.