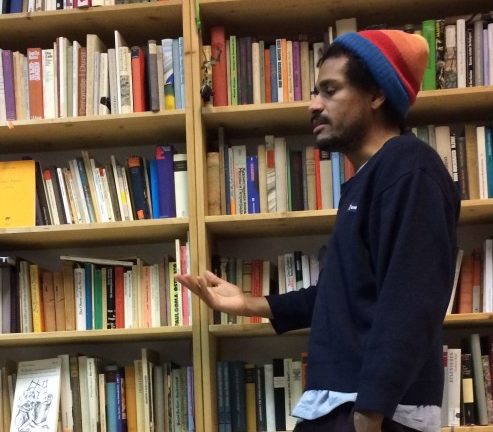 Julian Warner studied Theatre Studies, American Literature and ethnology at Ludwig-Maximilians-University Munich. His first artistic research took place in the are of futuroligy for the “Brand Fiction Project” of Audi AG. He curated workshops, performances and urban district projects for Lothringer13 Kunstareal of the city of Munich as well as lecture series in Favorit Bar. Since October 2015 he works as research associate at the institute of cultural anthropology of the University of Göttingen. His research focusses on Black Diaspora Studies, Racism and Pop Culture. As ‘Fehler Kuti’ he is part of the experimental band 1115 (Alien Transistor). Since 2015 he works together with Hannah Saar and Oliver Zahn in the association for artistic research HAUPTAKTION.

HAUPTAKTION is an association for artistic research formed around the producer Hannah Saar, the cultural anthropologist Julian Warner and the theatre maker Oliver Zahn. HAUPTAKTION studies theatrical practices using ethnography, archive-based-research and embodiment and has an output of texts, theatre, lectures. Theatre works include SITUATION WITH OUTSTRETCHED ARM (on the cultural history of the „Nazi salute“-gesture) and SITUATION WITH DOPPELGÄNGER (on minstrel dance, cultural appropriation and imitation). These pieces are theatrical essays, situated between choreography and historical study. They are being presented internationally. The name HAUPTAKTION is taken from the practice of German-speaking travelling theatres. > MORE